The fourth edition of Solutions&Co has just been launched !

On December 3rd, 20 leading economic media will publish on the same day the 50 best solutions ! 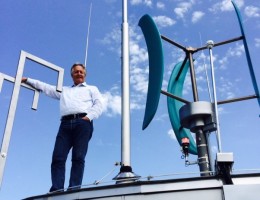 The energy sector is going through a bold transition towards renewables, an opportunity for the 1.06 billion people who still function without electricity. How can we ensure an equal access to clean energy all over the world? Discover in this article five initiatives that offer solutions to make the energy sector greener and fairer on #Ideas4Climate

Africa’s second largest oil producer, Angola, is turning to renewables with the help of companies like LTP Energias, aiming to achieve a 35% decrease in CO2 emissions

A major oil-exporting country and OPEC member, Angola is sub-Saharan Africa’s third-largest economy. Increasing the availability of electric power is becoming a high priority for its government as it is still heavily relying on oil as a major source of energy and electricity. One Angolan company is 100% focused on providing electricity solutions from renewable sources: LTP Energias. It offers everything from solar pumps for farmers to self-consumption kits for households to thermal solar solutions for water heating. Read more about this initiative on The Hindu Business Line.

In China, Pioneer Energy is tackling the issue of storing renewable energy thanks to an innovative thermal storage system

To promote national economic and social development, energy efficiency has been explicitly included in China’s twelfth five-year plan. Pioneer Energy is a company specialized in thermal storage which commits to developing highly efficient clean energy and energy-saving technology. They developed a phase change material (PCM), which is a substance with a high heat of fusion. When the substance melts and solidifies at a certain temperature, it is capable of storing and releasing large amounts of energy. This technology provides a viable solution for the heating of homes, water, businesses, etc. Read more on Ventures Africa, The Hindu Business Line, Yicai Global, Il Sole (in Italian) and Lëtzebuerger Journal (in French).

Green Energy & Biofuels (GEB) manufactures green cook stoves and a cooking biofuel gel (made out of renewable ethanol), made from waste products (e.g. sawdust and hyacinth). GEB is also able to transform sawdust into ethanol — an organic fuel that works as gasoline, gas or kerosene- but is 40% cheaper, is far less pollutant and safer to use than the latter. The company also claims this product is carbon-neutral. Interestingly, this company sells “the whole kit” (stove and biofuel) and relies on “social marketing model”. This means that anyone can sign up to join the company as “social entrepreneur” in order to distribute the product and therefore expand the market at a local scale; thus making the initiative highly sustainable. Read more on Yicai Global, The Hindu Business Line, Ventures Africa, Expansao, Valor Econômico (in Portuguese), El Economista (in Spanish)and Les Echos (in French).

In Russia, Wisesoil has developed a way to recycle biogas plants’ organic waste

With 625 million tonnes/year of organic waste, Russia has an extremely rich and untapped biogas resource to develop. The Russian company Bioenergy LLC is developing a set of solutions that makes organic waste recycling all the more profitable. The WiseSoil feedstock pretreatment module (FPM) is an industrial-scale solution for biogas plants and wastewater treatment facilities. The company skillfully surfs the wave of anaerobic digesters as the WiseSoil is conceived to be a pretreatment module able to increase biogas yields up to 23%. Read more on Ventures Africa, Hindu Business Line, Yicai Global, El Economista (in Spanish), Il Sole (in Italian), Kommersant (in Russian), and Valor Econômico (in Portuguese).

The Luxembourg-based company Swirl is developing a wind turbine concept that has the potential to refashion the management of mobile networks in off-grid zones thus providing electricity for communication and mobility. Swirl is developing hybrid mini-grids with a miniature wind turbine, capable of independently powering a mobile phone relay, anywhere in the world. This solution rejects very low GES as opposed to traditional diesel-powered GSM towers. A Swirl smart wind turbine cluster (2–3 turbines) provides up to 70–80% of the quantity of Watts produced by GSM towers while avoiding the rejection of more than 20 tonnes CO2/tower/year. Read more on Yicai Global,The Hindu Business Line, Ventures Africa, El Economista(in Spanish) and Lëtzebuerger Journal (in French).

In their op-ed Sylvain Boucherand and Charles-Adrien Louis emphasize on the importance to scale up the decarbonisation of energy. As the energy sector is still heavily reliant on fossil fuels, the cofounders of B&L Evolution both put into light the profitable domino impact that could exist if the deep relationship between fossil-fuel and energy sector diminished. This would be a powerful move that could efficiently fight against climate change. Read more on Solutions&Co.

The CEO of Engie addresses the importance of putting an end to the “energy access paradox”. This paradox consists in the constant opposition of the Isabelle Kocher concepts of energy access against the one of climate change. Highlights in this op-ed the necessity for all to work on ending that paradox in order to accelerate the fight against climate change. Read more on Solutions&Co.

You — readers, citizens, leaders, investors, consumers — can help to spread and magnify the effects of these solutions, so that tomorrow’s economy becomes a truly sustainable one.