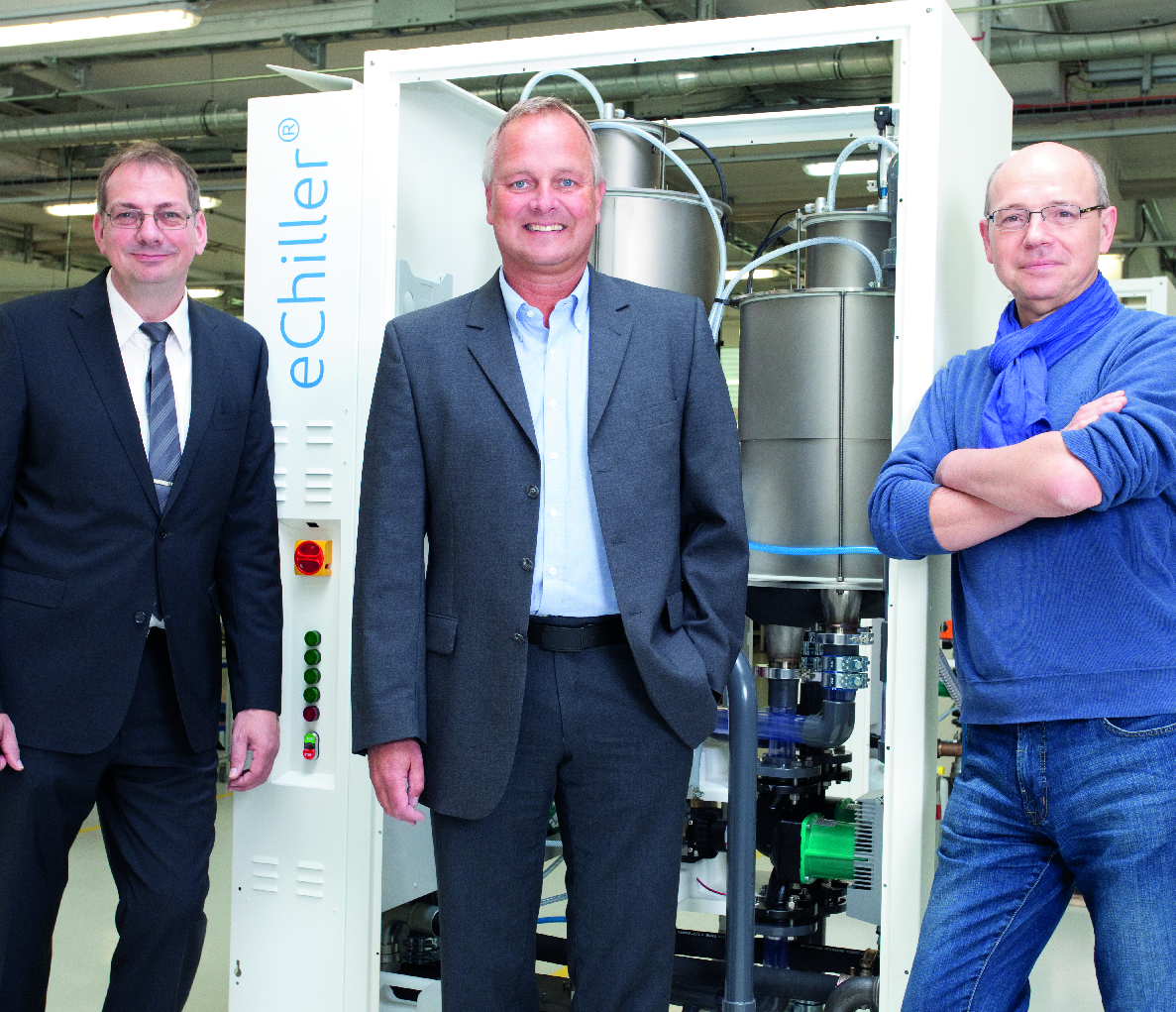 The company Efficient Energy has developed a new type of cooling unit- the eChiller- that can use water instead of environmentally damaging coolants.

Read more on Handelsblatt (in German).

Holger Sedlak is a computer scientist. He worked for a long time in a managing role at Infineon, where he developed more than eighty patents and was, by his own account, well paid. The fact that he now prefers selling cooling units, and has acquired sixty million euros in venture capital to do so, is all because of a heater.

Twelve years ago Sedlak had a new, modern oil-fired heater installed in his house in Sauerlach, a suburb of Munich. To his annoyance, the new unit was hardly more efficient than the old one. “There must be a better way,” he thought to himself, and began tinkering.

What he had in mind was an efficient heat pump that didn’t use environmentally damaging coolants, because hydrofluorocarbons are notorious greenhouse gases. In the end, since every heat pump also creates cold, just as every fridge gives off heat, the new heat pump turned into an innovative cooling unit.

“Everyone told me it wouldn’t work. Lots of companies had already tried and failed to do it,” Sedlak says. “I’m not a heating expert or an engineer. Thank God!” the computer scientist adds. “I just know the laws of physics. Using a simulator on my computer, I could see it had to work !”

Sedlak and his colleague, Oliver Kniffler, handed in their notice at Infineon and founded Efficient Energy. The two set to work on the cooler of the future—the eChiller—in his garage. They had to develop nearly all of the mini-turbine’s components themselves, including the electric motor with magnetic bearings. Their eChiller contains about fifty patents.

Using water to cool has a long history. The ancient Egyptians evaporated water in earthenware jugs to absorb the warmth from the surrounding air. The innovative aspect of the eChiller is that the coolant is tap water in a vacuum. The thinner the air, the faster the water evaporates. At the summit of the Zugspitze, the highest mountain in Germany, it boils at ninety-three degrees Celsius. “We evaporate water at between five and twenty degrees,” says Kniffler. Not only does the eChiller operate without damaging coolants and greases, it also saves energy.

The ten years of tinkering are finally paying dividends. The German Federal Environment Agency gave the idea the German Kältepreis 2016, an award for technological innovation in cooling and air- conditioning. This sector is under pressure to innovate and the use of environmentally damaging coolants like hydrofluorocarbons, which replaced equally damaging chlorofluorocarbons, is being gradually banned. By 2030, according to EU regulations, their use will not be allowed to exceed twenty per cent of the current level.

And the European Ecodesign Directive stipulates that cooling units must become more energy efficient. The consequence: “About ninety per cent of existing cooling units will not be allowed to be sold any more from 2019,’ says Jürgen Süß. The former technology scout at the Danish cooling technology company, Danfoss, was appointed as the start-up’s CEO a year ago.

Deutsche Milchkontor (DMK), Germany’s largest dairy company, has installed two eChillers in its data centres: “The wonder machine works,” says Joachim Hagenah, head of network hardware at DMK. “It’s a revolutionary technology. Over the course of a year, this device uses less than half the electricity used by previous cooling units.”

Cooling makes up half of a data centre’s costs. That’s why Google and Facebook have built their server farms in chilly Scandinavia. In Germany alone there are around 44,000 data centres. But small firms can’t just move their servers to the Arctic Circle. In total, according to calculations by the International Institute of Refrigeration (IIR), cooling and air conditioning use about fifteen per cent of global electricity. The eChiller, which can cool to between ten and twenty-eight degrees, is also suitable for indoor air conditioning, the food industry, and injection moulding. The IIR estimates the cooling and air conditioning market to be worth seventy to eighty billion euros.

Angel investor, Wolfgang Jacobi, was the first to back the innovation. In total Efficient Energy has raised about sixty million euros. Helmut Jeggle, from Santo Venture Capital, one of Efficient Energy’s investors, believes the innovation will make a breakthrough: “It’s going to be really exciting in 2017, when the market launch will speed up even more thanks to scaling effects.” The next step is to build more than 100 eChillers, which are no more expensive than conventional cooling units.

As promising as the outlook is now, the early stages were frustrating. The market launch was repeatedly delayed. “The firm grew more quickly than the product matured,” says Süß. In 2015, Efficient Energy had to let go of almost half of its sixty employees. Today, however, there are more than fifty staff members again.

Plenty of company technology scouts are turning interested eyes towards Feldkirchen. “Whether we join up with a big partner with manufacturing facilities and a global distribution network, or whether the company goes public – we’re open to anything,” says Süß. For Sedlak, the inventor who just wanted a better heater, only one thing matters: “We’re rewriting the history of cooling technology.”